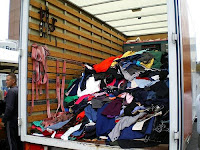 Great news! The 2007-2008 pilot program to collect and recycle textiles in Union Square and Grand Army Plaza was such a great success that the program has expanded for 2009. Drop off your clean items, wearable and unwearable, at these locations:Clothing, shoes, bedding, towels, coats, scarves, belts, handbags and hats, all are accepted. Help keep these recyclables out of landfills!