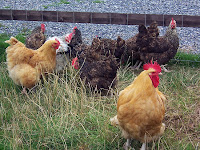 The Humane Society of the United States (HSUS) reached this morning with the United Egg Producers (UEP_, which could result in a complete makeover of the U.S. egg industry and improve the treatment of the 280 million laying hens used each year in U.S. egg production. Thanks to your support over the years, through our state ballot initiatives and legislative and corporate campaigns, we now have a new pathway forward to ban barren battery cages and phase in more humane standards nationwide.

The HSUS and UEP have agreed to work together to advocate for federal legislation that would:


This agreement now needs to be voted on by senators and congressman to become law. Please contact your U.S. senators and representative today and urge them to support this federal legislation to end barren battery cage confinement and provide more humane standards for laying hens.

Some of the provisions would be implemented nearly immediately after enactment, such as those relating to forced molting, ammonia, and euthanasia, and others after just a few years, including labeling and the requirement that all birds will have to have at least 67 square inches of space each. (Currently, approximately 50 million laying hens are confined to only 48 square inches each.) The bill would require that all egg producers increase space per bird in a tiered phase-in, resulting in a final number, within 15 years for nearly all producers, of at minimum, 124-144 square inches of space each, along with the other improvements noted above.

In order to protect Proposition 2 (a landmark laying hen welfare initiative passed in California in 2008 that many of you worked on), all California egg producers—with nearly 20 million laying hens—would be required to eliminate barren battery cages by 2015 (the date Prop 2 goes into effect), and provide all hens with environmental enrichments, such as perches, nesting boxes, and scratching areas. This will also apply to the sale of all eggs and egg products in California. And this agreement to pass comprehensive federal legislation on hen welfare puts a hold on planned ballot measures related to laying hen welfare in both Washington and Oregon.